Looking for a place to get your next Chinese meal without having to spend too much? Looking to help small businesses in this pandemic? Looking for something different besides your usual Yang Chow fried rice and sweet and sour pork?

Wah Liao Kwe might then be your new go-to! Located in Quezon City, the business delivers Chinese food right to your home. And because they’re served in platters, it can answer the meal plan for you and your family.

I was fortunate enough to try some of their dishes, and in my opinion, they have good potential. I tried two of their dishes: their Wanton Mee Platter and their Hainanese Chicken Platter. 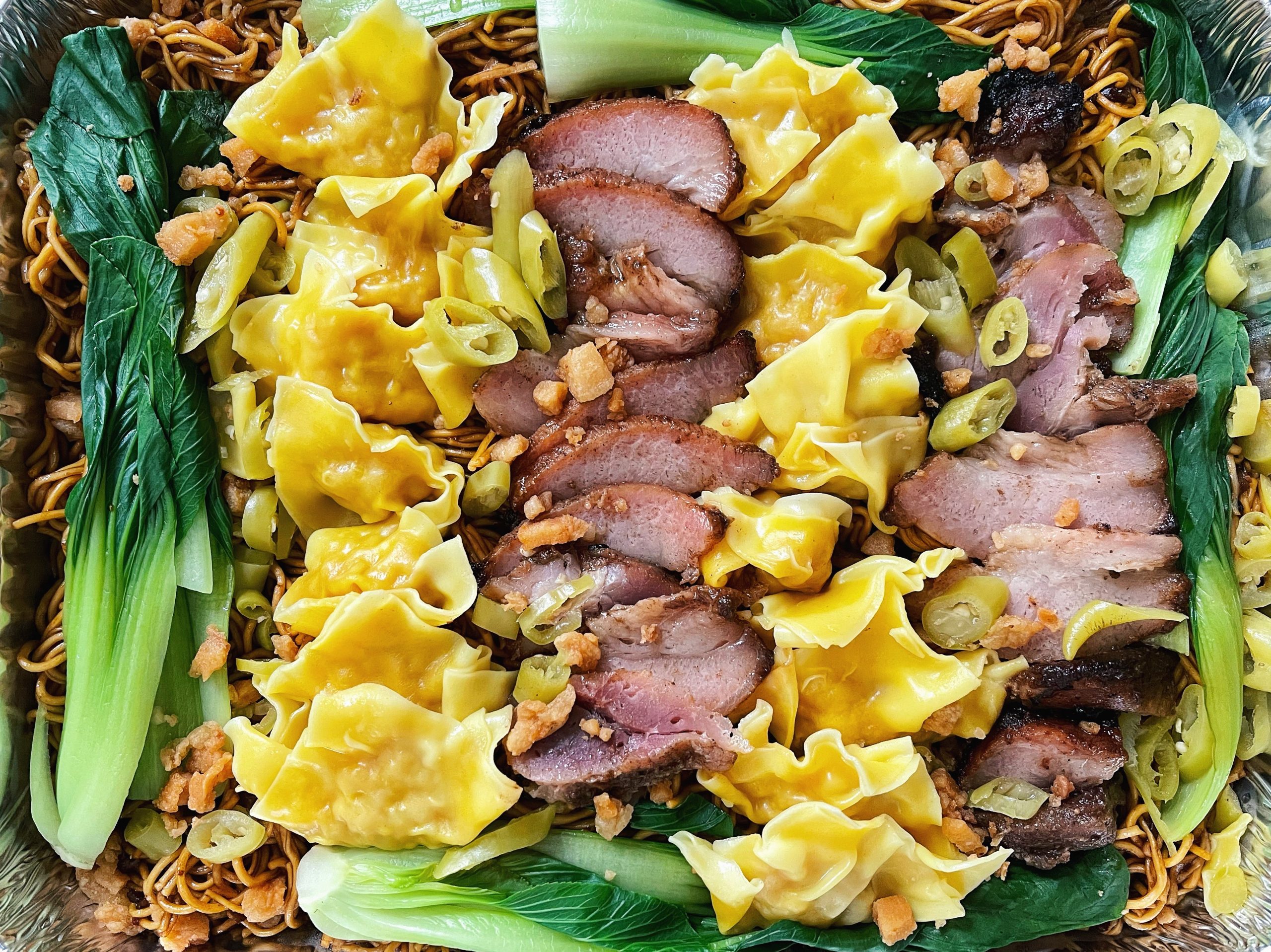 For me, their wanton mee platter was the more interesting dish: it’s not everyday one eats noodles topped with the greatest hits of wanton, asado, and vegetables. In most traditional restaurants, you have to choose — either noodles, wanton, or veggies, but not noodles topped with wanton, asado, AND veggies. At P1850 for a platter good for nine to ten people and P950 for a platter for four to five, the dish, for me, had an innovative spin.

The mee — Minnan for noodles — stood out in this dish. I loved how the noodles weren’t too oily, an aspect health-conscious Chinoys appreciate for sure!

When doing food reviews, I try to dissect the dish. Here, the noodles in and of itself stand out. The flavor is mild, but has a little sweetness with a little hint of chili. It’s not like plain rice that needs ulam.

When eaten with the wanton, asado, and veggies, however, the noodles become more layered. The sum of all the elements — the softness of the wanton, the salty sweet of the asado, and that healthy crunch from the veggies — will call people to want(on) for more. (Pun intended.) 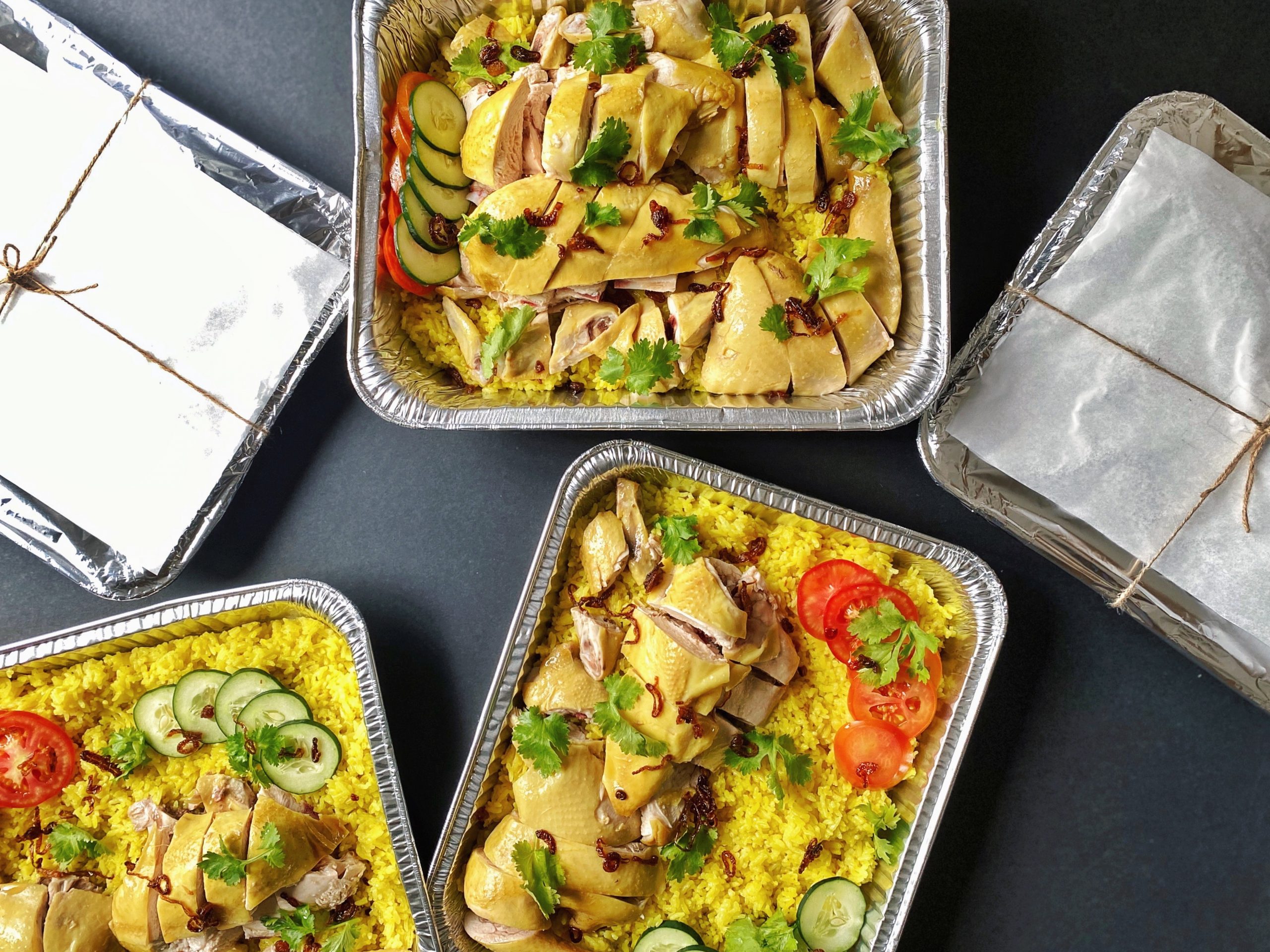 However, I’ll have to be slightly more critical about the Hainanese chicken, particularly the chicken itself.

As seen in the image above, I love the colors of the dish. Both the rice and chicken have this glistening yellow shade not usually seen in all hainanese chicken dishes. The price goes for P1200 for a serving for six to eight people and P680 for a serving for three to four.

But as for the taste of the chicken, I found it quite bland. It would be difficult for it to stand on its own, which, for me, was quite unfortunate. Sauce is definitely needed. That’s perhaps the insight I’d like to give: hainanese chicken, being of course a chicken-centric dish, needs the chicken to be the star.

What I will say, however, is that the rice complements the chicken, and this should be expected. With its glistening yellow color, chicken broth-based, not too salty flavor, the rice served as a key complement of the dish. Hainanese chicken wouldn’t be hainanese chicken without the rice!

Overall, I’d say Wah Liao Kwe is definitely worth a try! We always know and eat the usual Chinese dishes in the big Chinese restaurants. Why not try something new and something fresh from the comfort of our homes?

The author of this article:

An accomplished young Chinese Filipino writer and media personality, Aaron S. Medina is associated with the Philippine Daily Inquirer, the Ateneo de Manila University Chinese Studies Program, the Philippine Association for Chinese Studies, and CHiNOY TV. He has a passion for truth, justice, and Pokémon, too! Follow him on Facebook: https://www.facebook.com/aaron.joseph.s.medina/

Share0Tweet1
Tags:
Business, food, Taoke
Newer 10 online groceries that will get you through lockdown
Back to list
Older 2020’s Top 10 Chinese Baby Names

END_OF_DOCUMENT_TOKEN_TO_BE_REPLACED

Catch the 3-part miniseries made in partnership with Globe Business featuring Chinoy food and beverage from the biggest Chinatowns in the Philippines.

END_OF_DOCUMENT_TOKEN_TO_BE_REPLACED

Feng Shui Master Kevin Foong shares a personalized 2023 business outlook based on your sign and industry.

END_OF_DOCUMENT_TOKEN_TO_BE_REPLACED

Enjoyed MTK Fair 2023? Here’s Something To Help You Look Back

The Lunar New Year is never complete without our favorite Oriental treats! This year's Modern Tao Ke Food Fair was...

END_OF_DOCUMENT_TOKEN_TO_BE_REPLACED

Korean fried chicken has become the go-to comfort food for many people. It’s perfect for a solo snack or for...

END_OF_DOCUMENT_TOKEN_TO_BE_REPLACED

Michael Cua and John Tian Seng: the Cousin Duo Behind Pho Hoa and My Thai

Vietnamese food is somewhat of a rare find here in the Philippines. Even now, when international cuisine has become increasingly...

END_OF_DOCUMENT_TOKEN_TO_BE_REPLACED

Tofu Recipes Around the World

Tofu is likely one of the common pantry items found in a Chinoy household. Some might not like it because...

END_OF_DOCUMENT_TOKEN_TO_BE_REPLACED

Here Are 8 Special Mooncakes That You Can’t Miss Out On!

For those wanting something a little more modern and fun in their mid-autumn treats this year, why not check out our special mooncake rec list!

END_OF_DOCUMENT_TOKEN_TO_BE_REPLACED

In most families, there is a generation gap between parents and their children. It is not just because of the...

END_OF_DOCUMENT_TOKEN_TO_BE_REPLACED

With decades of experience in the field, Luftonic president and Techglobal marketing director Aldrin Chua reveals the values that have ultimately paved the rich road of his life’s career.

END_OF_DOCUMENT_TOKEN_TO_BE_REPLACED

4 must-have Chinoy values to make your business a success

With the likes of Sy, John Gokongwei, Lucio Tan, and other Chinoy entrepreneurs making it to the list of Forbes’...

END_OF_DOCUMENT_TOKEN_TO_BE_REPLACED

Hungry Ghost Festival Offerings: The Lucky Food of the Dead

What kind of foods should you offer during the Hungry Ghost Festival? We’re here to help out!